This is a follow up to last week's post Starting Out In The Industry: Advice for Runners & Newcomers. Thank you to everyone who tweeted, commented and offered suggestions, it was great to hear your feedback. One of the things people asked me to blog about is how to actually get Runner work, which is a big question! But before you start applying for jobs, I think its important to have an excellent CV and cover email template (and update for every job you apply for), so I'm going to focus on this today and tackle the big question next week.

CV in the TV & film world are quite different to the type of CV you'll write at university or in other industries. For a start it needs to be short, just 1 page ideally, and there's a lot of information you probably don't need to include. I've received lots of Runners CV that are 3, 4 or even 5 pages long and frankly its all wasted space and irrelevant information.

Here's what you should include:

All the information should be precise and relevant. Don't feel as though you have to bulk up your CV with unnecessary information. If you worked as a waitress for 3 years then that's great as it shows you have hospitality skills so I'd definitely include that. However, if you took part in Duke of Edinburgh when you were in Sixth Form, that's not relevant and doesn't tell the employer anything about your potential as a Runner (unless you're applying for a job on an outdoorsy programme, then by all means include it)!

I'd also suggest that you don't need to over explain what work experience you do have. On a previous draft of my CV, I described some of the tasks I undertook as a Production Runner on various past jobs but was told by a Line Producer that it simply wasn't needed. She explained that she, and other people who might employ me, know exactly what a Production Runner does so I don't need to specify on all my Runner jobs that I made tea, picked up talent and distributed paperwork. Besides, if the employer has any specific questions about your previous jobs, they will ask you.

Making the most of your formatting will also save space on the page, so make sure you don't have any gaps or blank spaces.

If you want to play around with the style of your CV to make it interesting then do so but with limitations. You don't have to use a bog-standard format, but please don't use colourful fonts or crazy graphics. I once received a CV that was had a black background, white text and pictures of clapperboards as the header and footer of each page... it looked tacky and unprofessional.

Similarly, don't include a photo. A passport picture looks creepy and a selfie looks unprofessional.

Its up to you if you want to stage your age or DOB, but personally, I don't think you need to as if you include dates with your education its easy enough to figure out how old you are.

An obvious one but check, double and triple check your spelling. This is especially relevant if you're looking to work in the production department as you'll be writing, reading and distributing lots of documents.

Here's a made up example of what I think is a great Runner's CV...

(excuse the red squiggly lines, this is just a screen grab from a Word doc!)

You probably think I've gone on too long about CVs - and to be honest I am a bit obsessed with them as I read them almost every day - but I genuinely think they're vital in getting work.

To push this point further, I'll tell you a little anecdote about a friend of mine who hopefully won't mind me sharing this...

I was working with a Runner who knew I was very keen on CVs and he asked me to look at his. I had a read of it and frankly it was terrible, and went against most of the things I've listed above. I told him this and he admitted that he'd been meaning to change it for a while, as during his last job interview the employer told him she would never have invited him to the interview based on his CV and had in fact only decided to meet with him because a colleague of hers had recommended him. In this case, the good recommendation overpowered the poor CV, but without that he wouldn't have even had a chance.

The most important thing about cover letters?

AMEND THEM FOR EVERY JOB.

Always personalise the cover letter to suit the job role and the company, as this shows you've put effort into finding out about the company and have genuinely considered how you might be suitable for the role.

Never, ever copy and paste a generic covering letter because it makes you look lazy and like you don't really care about the job you're applying for, that instead you're just applying for any and every job. Its obvious and employers always know. The giveaways are usually statements like "I'm really interested in your company" when you could easily use the actual name of the company or "I think I'm right for the position you advertised" when you could have stated the specific job title.

The main body of information the employer will need to know should be in your CV, so keep your cover letter brief and to the point. Don't go on about yourself, your hobbies, instead make a few relevant statements regarding yourself and the job. 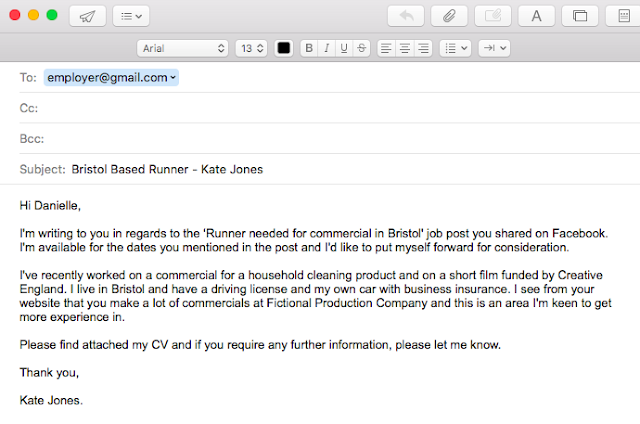 Again, your cover letter is important as its your first chance to make a good impression. I've received emails addressed to "Mr John", even though my email clearly states my full name and I'm neither male nor is my surname John. If you incorrectly address the employer, use a generic and obviously copy & pasted cover email or waffle on without addressing the key information regarding the job role, its highly unlikely you'll be considered for any work. In fact, if your cover letter is particularly poor they probably wont even read your CV.

Whether you're applying for a job vacancy or just putting yourself out there, you need to do everything you can to make yourself stand out. Having a strong CV, no matter how much experience you may or may not have, is vital. Introducing that CV with a clear, concise cover email is important too. Both documents require time and attention, which you simply have to put in.

Coming next week... How To Get Work as a Runner: The Plan of Attack!

I’m always happy to receive feedback or try to answer any questions you might have, so please feel free to get in touch.