Last week I was in Edinburgh taking part in The Network, the UK’s most prestigious television training and recruitment event. It was truly an unbelievable experience and one I am so grateful to have been selected for. 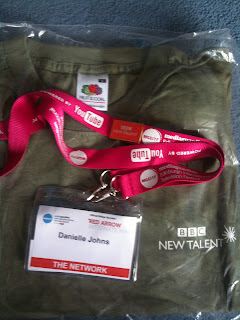 My The Network Delegate Pass and BBC new Talent Shirt.


Wednesday.
I arrived at Edinburgh University Wednesday morning where I met the other delegates of the program. There was a great variety of people, some with professional experience, and some without but all with a passion for television. My first experience of The Network was ‘The CV Clinic’, where I met with an executive from the production company that produces Location, Location, Location. She went through my CV and gave me some great advice on how to tailor it to best suit television roles.

Following my CV appointment, I collected several leaflets and flyer's detailing on recruitment events, training events and useful contacts from BBC, ITV and Channel Four. This information is only available to people who work in Television and delegates of The Network; you can’t find these names and email addresses on Google!

Following this I took part in ‘Script Writing Essentials’, a session which focused on writing for television and what makes a good show. This was run by writers from BBC Writer’s Room. We were also put into groups of three and given ten minutes to think of a sit com idea and pitch it to the room. After everyone had pitched their ideas, my group’s idea was selected to be the sit com that BBC Writer’s Room would theoretically commission.

Next I took part in ‘Presenter Experience’, where I was given two minutes to perform a script to camera as if I were a CBBC Presenter. This was a great experience and I really enjoyed working with Newsround and BBC Sport presenter Ore Oduba, who was there to offer advice, support and perform the other lines. I was then given feedback on my performance from the Head of Presentation at CBBC and a DVD of my audition tape for future reference and which I can use in my show reel.

The final workshop of the day was ‘The Pitch Doctor’s Guide to the Art of Networking’ by Paul Boross. Paul gave a fantastic lecture with lots of interesting inside information on how top industry professional successfully pitch their ideas to executives, the best methods of networking and how to make sure people remember you in the right way.

That evening I attended the opening night event where we had a TV quiz, entertainment from Frisky and Mannish and free drinks all night. The event was hosted by CBBC’s Iain Stirling who I found out is also a great comic as well as a TV presenter.

Thursday.
The following day I attended master classes by TV Executives where we were given advice, tips and information on working in TV. We were also able to ask questions and discuss our own ideas with the executives. I attended classes by Zai Bennett (Controller, BBC3) and Peter Fincham (Director of Television, ITV). After this there were workshops by the makers of Horrible Histories, where I met the producer, researcher and actors from the show. Following this was a workshop by writer and journalist Charlie Brooker, where he discussed his career and answered our questions.

In the afternoon we were put into groups to work on specific areas of television. I put myself forward to be in the ‘Production Skills’ group and was really pleased to find out I’d be chosen for this. We then met with our workshop leaders and I was really excited to meet them, especially when I found out their job titles; Head of Presentation (CBBC), Assistant Producer (Blue Peter), Producer (Strictly Come Dancing) and Director (CBBC). We then discussed what we’d be doing for the rest of the week, which was producing a live show.

That evening we went to one of the highlights of The Edinburgh International Television Festival, The James Mactaggart Memorial Lecture. This year it was by Elizabeth Murdoch who had prepared a very interesting lecture.
Finally that night, I attended ‘Channel 4 Opening Night Drinks Reception’ at The Edinburgh Museum. This was an amazing experience; free champagne, canapés and a room full of TV Executives and celebrities. We were told to meet new people and network and so I approached TV presenter Clare Sweeney and her agent and had a great conversation with them both. They were absolutely lovely and very welcoming. The agent also offered me some great advice for my own career in presenting. I also bumped into Natasha Kaplinsky and Claudia Winkleman, which made me feel very professional to be at the same party as these very popular presenters and newsreaders.
Friday.
On Friday we started working on our group projects and I was given the role of Script Writer and Floor Manager for the live show we were producing. I asked our team leaders why they’d given me the role of Floor Manager and they explained that the person for this role needed to be efficient, organised and very likable. They are the person who hears the producer and direct in the headset and must communicate to the crew and talent what is going on and what must be done. They run the floor and keep everything in working order. I was really glad to have been given this role and took it as a compliment that they trusted me to run the floor.


Later on I attended a session with the producer, writers and actors from Sherlock. This was a really interesting insight into the show and we were given information on how Sherlock went from an idea to an internationally renowned television show.
That evening I attended ‘Channel of the Year Awards’ which was fantastic. Here I watched people from BBC, ITV, Channel Four and other companies collect their awards. I also got to see Victoria Wood, Konnie Huq and Britain’s Got Talent winners Ashley and Pudsey present the awards. 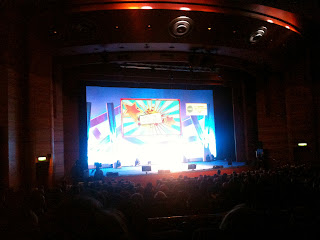 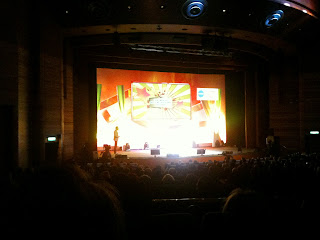 After this I attended an exclusive party for TV professionals at a very posh hotel in Edinburgh. This was an unbelievable night and I felt like a celebrity! Everyone was having a great time and was very friendly. It was great to see people having a good time and made me realise how all the executives and celebrities are just the same as anybody else. This was an encouraging thought when networking.


Saturday.
Saturday we produced a live show which was hosted by Ore Oduba. During the show we had live interviews, audience interaction and video clips which portrayed the various events of the week and what we had all been up to. This gave me an understanding of what it would be like to be a real Floor Manager on a live show... and I loved it! This is definitely a role I’ll consider in the future, once I have more experience. The live show went well and we were all complimented on its success and smooth execution.


Finally, there was a session called ‘So You Want to Get into Broadcasting?’ where Konnie Huq ran a Q&A session with some of her fellow broadcasters. This session was also being filmed and so I continued my role as Floor Manager during this.
This was the finale of The Network and it seemed to have all gone so quickly. I met some fantastic people, both professionals and fellow delegates, made some great contacts, picked up some very useful skills and took on board some hugely beneficial advice.
I’ve now been inspired more than ever to start my career in television and I believe The Network has given me everything I need for this; Confidence, Contacts and real industry Skills. I’ve taken away from this experience more than I ever expected and I’m determined to make the most of every skill and contact that I’ve made.
I’m now looking for work in TV and Film production, preferably in script writing and production.
I’m also working on my sit com idea and once I’ve completed the pitch and pilot episode, I’ll get in contact with some of the professionals I met at The Network. I’ve also got a few other ideas for TV shows which I’ll keep pitching until one of them pays off.
I’m also planning to create a Presenter’s Show reel which I’ll send to the contacts I made at CBBC and BBC.
I would encourage anyone with an interest in working in Television to apply for this scheme. It genuinely has been remarkable and I’m sure it has made an impact on my future. You can apply for The Network 2013 via their website.
Email Post